It’s the beginning of a great, big, new, adventure and where better to write about it than here, the place I started my journey. Well, I didn’t quite literally begin life on this website, but Endangered Living has been there for me as an outlet, a place to share, and a community of support over the last several years. So it’s fitting that I get to share with you my latest endeavor: The Pan Verus Project

END_OF_DOCUMENT_TOKEN_TO_BE_REPLACED

Outamba Kilimi National Park is Sierra Leone’s first national park, and in located in the far north of the country along the Guinean border. The national park is comprised of two non-contiguous areas, Outamba (183,100 acres) and Kilimi (90,900 acres). These protected areas lie at an important transition zone in Sierra Leone’s landscape, where the Upper Guinean Rainforest Ecosystem begins to transition into savanna and open woodland. END_OF_DOCUMENT_TOKEN_TO_BE_REPLACED

One of the few animals I saw on a regular basis while in Sierra Leone was the Great Blue Turaco. The first time I was told by Papanie that the giant blue bird that flew overhead was a turaco I was shocked. The turaco I had worked with in Dallas had barely been half that size! But the more I saw them the more resemblance I saw to Marty, my Dallas-dwelling turaco. So in honor of the Great Blue Turaco and the amazing wildlife of Sierra Leone, lets have them be the next focus for an Odd Animal Profile.

Corythaeola cristata. I don’t normally include the scientific names in my O.A.P.s but Corythaeola crostata rolls off of the tongue with such grace. It is a name that couldn’t belong to any other animal than this giant, blue bird.  END_OF_DOCUMENT_TOKEN_TO_BE_REPLACED 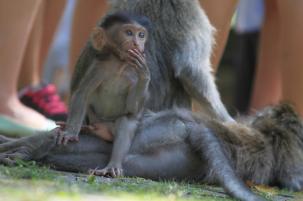