While I faced visa problem after visa problem I found comfort in knowing that one of my cohort, and a great friend, Tom was out in the jungles of Borneo living the dream. Somewhere between May and July of 2015 I asked him to write a guest post, and being the person that I am, I am only getting around to posting it now. Sorry, Tom! But it was worth the wait, he really brings the jungle to life:

In this summer of 2015 I had the good fortune to find myself in a Bornean rainforest conducting fieldwork for my MSc. The Sabangau peat-swamp forest in Central Kalimantan was my home for two months. As I write these words my time here is drawing to a close. Read on, if you will, and I will tell you about the remarkable place where I lived and the strange and wonderful things that I saw in my short time living in the jungle.​ 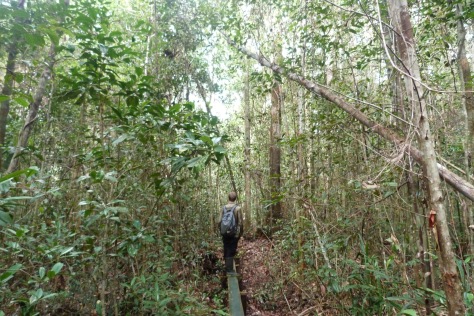 The Orangutan Tropical Peatland Project (better known as OuTrop) operates out of a large clearing a few hundred metres inland from the south side of the Sabangau River. It started its life as a camp for commercial loggers but is currently occupied by an altogether different breed. The tin roofs and white-washed walls now shelter researchers and conservation scientists, both local and international, as well as a steady stream of students that come from all over the world to study the Sabangau Forest and the countless species that call it home. It is in this latter category that I fall.

A railway stretches out onto the river and disappears into the distance. To reach base camp a hired fishing boat sidles up alongside it and we must clamber on up, trying to keep a steady grip on our personal belongings. To call the railway dilapidated would be an understatement. It stands on stilts above the water’s surface and a precarious series of boards is our only way to reach camp. Unless you’re happy to wade. The rail enters the forest and trundles along until it reaches the clearing. Sometimes we even run small trains up and down it to help with transporting heavy equipment. From there the rail shoots on into the jungle, almost instantly becoming unusable by trains and degrading entirely by a kilometre in as the jungle rots away the wood and corrodes the iron until nothing much is left.

Like the rails the entire camp stands on stilts, lifting every structure over a foot above the ground. This is a swamp after all and in the wet season the water level gets quite high. At this moment the wet season is in the process of becoming a dry one and all to be seen below the boardwalks is mud and the tangle of tree roots.

Around the clearing the jungle looms from all sides and we receive regular guests. Dragonflies and butterflies weave their way through the air, geckos stick to every surface and nimble skinks scurry along the walkways. Bats live in the cabin that houses the senior staff and a monitor lizard exceeding 2 metres from nose to tail visits the little pond behind the kitchen to look for scraps.

On my first day in camp I saw a family of bearded pigs foraging in the forest directly behind my room and once while working in the office I looked out of the window to see an orangutan perched in a treetop high above. Not many can claim to have seen that over their morning coffee!

The forest that surrounds us is peat-swamp forest, a unique ecosystem full of densely packed trees and shallow bodies of water. In some spots the mud is so deep that one wrong step will send you plummeting down to your hips. The high levels of peat makes the water very acidic. Too acidic in fact for the leeches that are found in other forest ecosystems, which is certainly a blessing for us. Not too acidic, unfortunately, for mosquitoes, and the eclectic collection of ponds and pools makes the swamp-forest a perfect breeding ground for mozzies.

To my surprise even the tiniest of these pools contain fish. For the most part small and minnow-like, but large and bizarre specimens are sometimes captured by the researchers, including a half-metre long catfish that migrates from pool to pool using its fins to crawl on land.

Being a student on a Primate Conservation coure it seems natural that my main fascination is with the many primates that inhabit the region, and while the Sabangau has an abundance of life when it comes to primates we really are spoiled for choice. The red langurs live in large polygynous groups and as their name suggests are clad in coats of vibrant scarlet. They cover huge distances with their leaps and might even give the gibbons a run for their money when it comes to raw acrobatics. In the night tarsiers and lorises hunt their quarry of insects but are so rare and shy that they have only been seen a handful of times by even the most senior guides.

My favourite species are the Bornean agile gibbons, sometimes called the white bearded gibbons for the ruff of white fur they sport around their chins. These apes are well known for living in small monogamous families and their distinctive way of getting around; by using their long powerful arms to swing through the trees, a method known as brachiating. They are extremely acrobatic and one of the fastest animals in the jungle. This meant that following them on foot through the unforgiving swamp was always a challenge and usually had me exhausted by the time I went to bed.

Of course it wouldn’t make sense to talk about Borneo without talking a little bit about the orangutans. The Sabangau rainforest has one of the largest populations of the iconic red ape left on Earth and many of the individuals around camp have been studied for so long that they are habituated to humans. The first time I saw a wild orangutan was a day I am unlikely to forget. We went out with the intention of finding one such ape, and came across not one but four. Two mothers feeding on termites together in a tree while their children played above them. Four orangutans at once! I remember thinking that no one back home would believe me….

It has been hard living out here in the jungle. My body is a collection of cuts and bruises and most days I come back from work too exhausted to do anything more taxing then eat and sleep. But the experiences I’ve had and the things that I’ve seen make up for that many times over. I’ve woken up to the sounds of gibbons singing. I’ve scampered out of the way as a giant flanged male orangutan climbed down to the ground beside me. I’ve eaten my lunch to the sight of red langurs chasing each other in circles above my head and looked out over the endless jungle canopy from a 100ft high weather-station. It saddens me that in just two short weeks I’ll have to leave this all behind. There are still so many things that I haven’t done, that I haven’t seen. I know though that if given the chance I will be back in a heartbeat.

A note from Sarah at Endangered Living: Tom is a really cool cat. He actually caught a juvenile orangutan playing with a young gibbon on film! That’s a big deal! So, if you need a little extra cuteness in your day take a look: 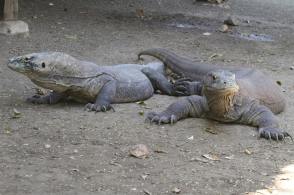