It’s been a while but it is time for another Odd Animal Profile! If you haven’t been around on the site long check out some of our other OAP’s like the oh so popular okapi or maybe you’re in the mood to learn about the sunda flying lemur? Oh I do love animals called “flying” that can’t actually fly! Why don’t they just call this amphibian the gliding frog? Or the frog that can jump extremely long distances? Well, I guess it’s because it’s quite a mouthful, so flying frog it is!

This particular frog is called a Wallace’s flying frog and it is found in Malaysia and Indonesia. These guys also get the very cool title of parachute frog. They use the webbing between their feet to help them glide when they jump from one branch to another, sometimes up to 50 feet!

They are not the only species of gliding frog, but they are the largest, and in my opinion the prettiest.

Wallace’s flying frogs also have an incredible relationship with the extremely endangered Asian rhino. They will actually use the rhinos wallowing holes as their nesting grounds, so as the rhinos continue to go extinct (there are less than 100 left) the Wallace’s flying frog looses its favorite breeding ground. So this tiny little frog relies on this great big mammal for it’s survival, making it incredibly unique! 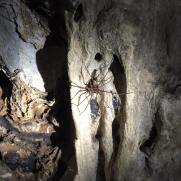