Yippee! My favorite cetacean! When I was in high school I went on a dolphin studies program in Belize, and for the final project we had to chose any cetacean and give a presentation on them. I chose the narwhal and have been smitten ever since.

This is just a little bit more than an O.A.P., Harvard scientists have actually just discovered what the purpose of the narwhal’s 8-foot long tooth that that protrudes from its upper jaw. The tusk that gave it the narwhal its nickname of unicorn is odd because it emerges from the left side of the jaw and is found in most males and some females. Some narwhals have two tusks, though the trait is rare. 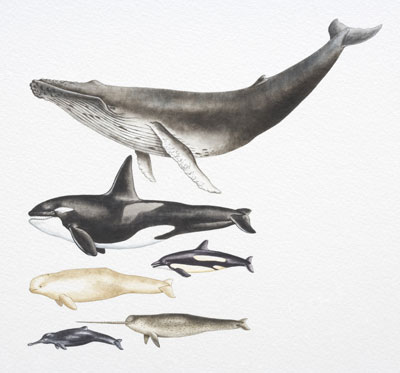 The narwhal lives in the Atlantic portion of the Arctic Ocean. It is about 13 to 15 feet long and weighs 2,200 to 3,500 pounds with the males being larger. Males will often rub their tusks together in a behavior called tusking. There have been many theories as to why the narwhal has a tusk. Some believed it was used as a sparring instrument. Others thought, foolishly, in my opinion, that the narwhal would spear its food with it. I never understood this theory because the narwhal would have no way to get the food off of its tusk, but that’s just the musing of a college girl.

Martin Nweeia, researcher from Harvard School of Dental Medicine has just discovered the narwhal’s tooth has hydrodynamic sensor capabilities. Say that five times fast. That means that the tusk has ten million itsy bitsy nerve endings that cover the surface of the tusk and, even though its spiraling surface looks hard and unfeeling, its actually more of a very sensitive membrane. Their tusk can detect changes in water temperature, pressure and even particle gradients! This means they are even able to tell the salinity of the water! I know a lot of you are rolling your eyes right now, but I think this is so exciting!

The narwhal is truly deserving of an odd animal profile, as there is no other tooth like the narwhals in nature. There are about 50,000 narwhals left and they are being directly effected by global warming. Learn more about Nweeia’s research here.