India is the fourth country to ban keeping cetaceans in captivity, behind Costa Rica, Hungary and Chile. Dolphins and other cetaceans have long been kept as a source of entertainment and guaranteed income in zoos and theme parks alike. But knowing what we know now about cetacean intelligence, is that really the right thing to do?

I know that it may seem from my last few posts that I am vehemently anti-zoo, but that is not the case. I think that zoos are fantastic ways to educate people about the world they live in. I think that they offer a unique experience for someone from Idaho to see a lion, when they will probably never make it to Africa to see one in the wild. I do, however, think that there is a line that is crossed over and over again in the name of monetary gain. Cetaceans in captivity is an example of just that.

Dolphins have been shown to understand human languages in a way most animals can not. They are capable of actually understanding what is said and not just reacting to cue words, like your dog or parrot for instance. If you ask a dolphin to “bring ball to hoop” it will put the ball in the hoop, but if you ask it to “bring hoop to ball” it will put the hoop around the ball. These are subtleties that our canine companions would most certainly miss.

Not only that, but they have actually been revealed to have their own language of clicks and squeaks. so much so that we have recently discovered dolphins give each other individual names.

When dolphins interact with humans they have been known to detect tumors, show interest in babies, still in the belly and lend a helping hand… arm, fin. They can use their echolocation to tell what shape toy is inside a closed box. They are intelligent. Now stick a creature like that into a cement box where their echolocation bounces right off the walls back at them and only allow them to interact with the same beings day in and day out. They go insane. Dolphins will commit suicide when being kept in captivity. Wouldn’t you?

So these reasons, along with many many others are why I support India, Hungary, Chile and Costa Rica in their ban of dolphins in captivity. I also urge the U.S. and Europe to listen to the Indian Ministry when they say,

“Whereas cetaceans in general are highly intelligent and sensitive, and various scientists who have researched dolphin behavior have suggested that the unusually high intelligence; as compared to other animals means that dolphin should be seen as ‘non-human persons’ and as such should have their own specific rights and is morally unacceptable to keep them captive for entertainment purpose.” 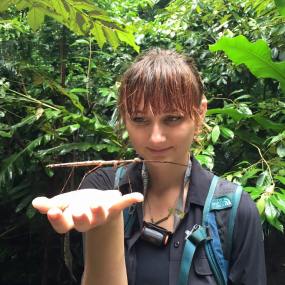