We have finally arrived at the smallest primates in the world. The members of the cheriogalidae family include mouse and dwarf lemurs. Now, all lemurs are found on the island of Madagascar, which is off the eastern coast of Africa. Cheriogalids are both nocturnal and live their entire lives in the trees.

Cheriogalids are omnivorous and love to eat anything from fruit, flowers, leaves, small vertebrates, and insects. Something fairly odd about these primates is that they will have three to four offspring at a time. Most primates only have one baby at a time, rarely some have twins.

The worlds smallest species of cheriogalid was discovered by Dr. Mireya Mayor, who I happened to meet recently at the Wildscreen Film Festival. She discovered the small species of mouse lemur in 2000, an act which helped her gain notoriety as a National Geographic explorer and as a primatologist.

Something interesting about cheriogalids is that some species will store fat in their tails and hind legs and actually hibernate. Hibernation is a pretty rare trait among primates, so that makes cheriogalids quite special. 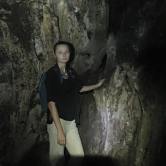