It seems that lately Ecuador has been giving up a lot of its secret species. The fabulous Olinguito was recently discovered roaming the tree tops of Ecuadorean cloud forests, and now a new species has popped up from the mist. The Pinocchio lizard has been suspected extinct since sightings of the little anole stopped some 50 years ago, but once it was spotted again in 2005, then recently on an expedition to Ecuador it was found that these little lizards are alive and well.

There are a few characteristics that set the Pinocchio lizards apart, most notably being its proboscis, or protruding nose (think proboscis monkey). These guys may seem out of this world, but if you grew up anywhere in the south (I live in Dallas and I see these guys all the time) or have ever been to a Petsmart, you’ve probably seen a Carolina anole, but I know them as green anoles because when they’re green (they can also morph brown) they are a bright and vivid green. 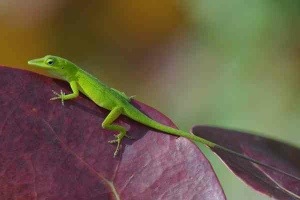 Now the Pinocchio anole is different in the fact that it’s colors are quite unique, and it also moves very very slowly. Scientist discovered that the easiest way to find the Pinocchio anole was by searching at night, sine the lizard was known to sleep at the tips of branches and change its skin to a very light, almost white, color. Many specimens were identified this way, and for the first time, females were spotted as well. Female Pinocchio anoles do not have the proboscis that makes the male so identifiable, so they are not as easily spotted. During the day the anole spends most of its time high in the canopy, moving around slowly and camouflaging well with its environment.

Now you may have read my earlier post Tragedy at Yasuni which discussed the new plan to drill for oil in one of the most biologically diverse places on the planet. Now you might be wondering, is this rare and recently ‘rediscovered’ lizard living in Yasuni? Yes, and he is threatened by the increased traffic through the park and the desecration of his forest home.

5 thoughts on “liar, liar, not extinct” 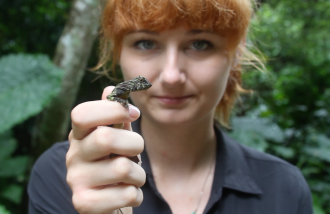