As my study abroad plans to spend a semester in Costa Rica fell through I had to  begin looking for an apartment back in Dallas. I was not thrilled because, as much as SMU has done for me, for a while it wasn’t my favorite place. I probably shouldn’t have chosen a school known for business and not at all for science, but at the time I was desperate to get away from Florida for a little while. But my plans of transferring were not looking bright and I was hoping to find a ray of sunshine to make my stay in Dallas more appealing. Enter, the Dallas Zoo.

I applied for my first ever paying zoo job at the Dallas Zoo as a Wilds of Africa Interpretive Specialist, part-time. I was so excited. It sounded like the most amazing job in the world, it talked about giving educational talks with animals around the African portion of the zoo.

This is about the time that I would like say that the Dallas Zoo does a lot of incredible things, and I don’t have bad things to say about the people I worked with, it was just the kind of job that showed me what I didn’t want to do with the rest of my life. I really loved the Palm Beach Zoo, but it just wasn’t the same as the Dallas Zoo. The Dallas Zoo is a much larger institution, and it wasn’t made up of a full 30 staff members like the Palm Beach Zoo was, the department I was in was going through a lot of changes and working almost 30 hours a week while being a full time student trying to graduate a year early is much harder than it sounds (and yeah, I know, it sounds hard).

I was hired with one other part time girl, and I quickly found out that the stage and animals that were talked about on the job description hadn’t arrived yet, as it was still in the planning process. So I got to drive a monorail and give educational talks. This 25 minute ride through 8 or so habitats was quite monotonous.

I love education. Which is honestly something I never thought I would say, but this was a different level than I was used to. I went from being a zookeeper, always covered in poo, to never having animal interaction unless the outreach department was short staffed.

I mean, for what I was getting paid it was a pretty easy job. There were five of us when I started and we each rotated taking a train, so when we only took out one train a day(there could be as many as 3, running every 10 minutes, which was a living hell) that meant that I would give a tour every 2 hours, and the rest of the time I would just get to talk to guests who were in line, or sweep the always leaf strewn pathway.

This went on for several months, with increasingly more visits to outreach to help out and ‘learn to hand reptiles.’ Then finally, 4 months after we were told it would be finished, our stage was built and animals were brought down. I was ecstatic, but at about the same time our supervisor quit and there was some building tension in our department, I think everyone was just stressed from all the changes that had happened so quickly.

But I didn’t really care. I got to be on stage with snakes, and penguins and a great big tortoise, and even got to snuggle with our baby African crested porcupine during my lunch break. I was finally getting to work with animals. Just about this time I started getting burnt out on school. I was taking 6 different classes, most of which were journalism classes and required a lot of outside work to write news stories. I was always tired, and my blossoming relationship with my amazing boyfriend was suffering, as were my grades. Every once of energy was going into giving it my all on my monorail tour and my blissful hours spent on stage, being perpetually peppy is not as easy as the girl on the microphone makes it sound.

So after almost 10 months at what was supposed to be my dream job, I had to get my priorities straight. School comes first, because if it hadn’t I would not have been accepted into the amazing masters program in primate conservation I will be attending fall 2014, but that’s a story for the next post about my journey to the jungles of Borneo. 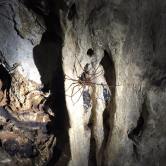