Biruté M. F. Galdikas was born to parents leaving Lithuania at the end of WWII for greener pastures in Canada. She was raised in Toronto in an ever-growing Baltic community. She states, “because of my mother’s tales and my parent’s fondness for nature, I became that unlikely combination of bookworm and nature lover”(39, Reflections of Eden). While growing up in Canada she often explored in the woods behind her home, envisioning herself becoming a great adventurer like the Man in the Yellow Hat from Curious George a favorite book form her childhood.

When she grew older her parents moved from Canada to the U.S. In 1964, after Biruté had completed a year at the University of British Colombia in Vancouver. She followed her parents to the U.S. and began studying at UCLA and there she earned her bachelors degree in psychology and zoology and then her masters degree in anthropology by the year 1969.

Her adventure began when she met Dr. Louis Leakey as a graduate student at UCLA, who came to speak there. Leakey was the most famous anthropologist of his time, and some argue, still is. Leakey is responsible for all of the information gathered at Olduvai Gorge and the discovery of Australopithecus, which led to much knowledge of human evolution. Leakey was also responsible for sending three women out into the wilderness as pioneers of primates. Dian Fossey, Jane Goodall and Biruté Galdikas are often referred to as ‘Leakey’s Girls” or, my personal favorite, the ‘Trimates.’

It took Biruté three years to convince Leakey that she was the person who was meant to study the orangutans in Borneo, and finally Leakey agreed to fund her trip. Galdikas went to Borneo with her then husband Rod Brindamour and there they began clearing trails and setting up camp in Tanjung putting Reserve in Indonesia, Borneo. (Borneo is an island that is seperated by two countries, Malaysia and Indonesia.) There, she and Rod set up Camp Leakey and began observing wild orangutans.

They also played a part in convincing Indonesian officials to enforce the laws that dealt with keeping orangutans as pets. It was, and still is, illegal, but is a very commonplace practice, especially when Galdikas first made the trek over. It was seen as a status symbol to own a baby orangutan. The meathod in which people capture orangutans is quite sinister. They will actually shoot the mothers out of the trees and pull the baby off of the mother’s dead body. Baby orangutans actually stay with their mothers for about 8 years, and when they are taken from their mothers, it is a trauma they never forget and almost never fully recover from.

One thought on “primatologist bio: galdikas” 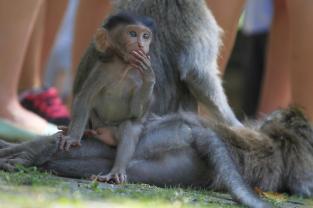